Fight Songs: A Story of Love and Sports in a Complicated South (Sept 2021)

“This book is about so much: the South, love, history, and how sports define, degrade, refine, and redeem us. Holding this gumbo of ideas together is—what else?—football. Fight Songs is epic, how tailgating with Friedrich Nietzsche would be epic. I’m really glad this book is in the world.”
—Daniel Wallace, Extraordinary Adventures and Big Fish

“I promise that you have never read a book that so beautifully and intimately reveals the soul at the center of sports fandom—that understands so fully what it means to root. Fight Songs is a book about love and history and culture. Its truths are arrived at honestly and without pretense and it is, quite simply, one of the greatest sports books you will ever read. ”
—Travis Mulhauser, Sweetgirl

“A lush, meditative look at how sports and the places we call home are just as flawed and beautiful as we are, and how one is always defining the other. Damn fine writing!”
—Jason Mott, Hell of a Book and The Returned

Order your copy from Bookmarks or your local independent bookstore. 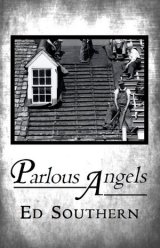 “Ed Southern’s stories are about hard work
and hard times and what is required of a boy
to become a man in such a place and time.
They are also about class—that taboo subject
in America—and about anger, love, and yearning.
Carefully written, with the best dialogue I’ve read
in years, these terrific and utterly original stories
are made to last—like a stone pathway or a brick wall.”

— Lee Smith, author of Dimestore and Guests on Earth

Voices of the American Revolution in the Carolinas (2009)

The entries in this volume are taken from first-person narratives by those on the scene, from officers such as Henry Lee and Banastre Tarleton to teenaged scouts such as Thomas Young and James Collins. The American Revolution in the Carolinas was nasty, brutish, and relatively short, though it must not have felt short to those who lived through it. It moved with a furious swiftness, the center of action shifting from Charleston to Camden, from Charlotte to King’s Mountain, and from Cowpens to Guilford Courthouse in a matter of months, weeks, or sometimes days. Accounts that describe what it was actually like at all of these hot spots as well as the events that lead up to the actual fighting are included in this book. Voices of the American Revolution in the Carolinas gives the reader some idea of what it was like to be part of a war when two states were ripped apart but a nation was made. 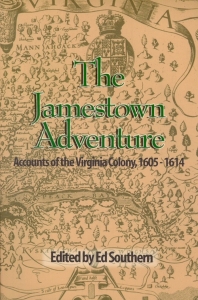 In December 1606, three ships carrying 144 passengers and crew sailed from London bound for a land that had already claimed more than its share of English lives. In May of the following year, little more than 100 men would disembark to settle on a small peninsula in the James River. Eight months later, only 38 men were still alive in the fort they had named Jamestown.  This volume collects contemporary accounts of the first successful colony the first thirteen United States. These narratives take the reader from the London stage to Powhatan’s lodge, from the halls of royal power to the derelict hovels of the Starving Time.They show the modern reader what an adventure the founding of English America was—the desperate battles and fraught negotiations with Powhatan, the political intrigues in Europe and Virginia, the shipwreck that inspired Shakespeare’s The Tempest, the discoveries that thrilled the colonists, the discoveries that broke their hearts.

You can order Ed Southern’s books through Amazon.com or BarnesandNoble.com,
but he’d really rather you didn’t.